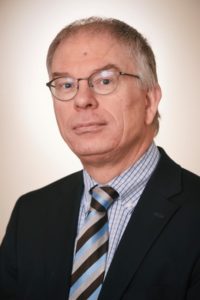 Prof. Vincent Grégoire graduated with as a Medical Doctor (MD) in 1987 from the Université Catholique de Louvain in Belgium. He was board certified in Radiation Oncology in Belgium in 1994 and obtained his PhD in Radiation Biology in 1996 after a fellowship at the Netherlands Cancer Institute in Amsterdam (The Netherlands) and at MD Anderson Cancer Center in Houston, Texas (USA). Since his return from the USA, Prof. Grégoire was appointed at the Academic Hospital of the Catholic University of Louvain in Brussels, Belgium, where he was the Director of the Center for Molecular Imaging, Oncology and Radiotherapy, Full Professor in Radiation Oncology, and Head of Clinic in the Department of Radiation Oncology. From May 1, 2018, Prof. Grégoire is the Head of the Radiation Oncology Department at the Léon Bérard Cancer Center in Lyon, France. He coordinates the Head and Neck Oncology program where the publication of the consensus guidelines for selection and delineation of the target volumes brought him worldwide recognition. Beside his clinical activities, Vincent Grégoire has been running a translational research program on tumor microenvironment, on the integration of functional and molecular imaging for treatment planning, and on the molecular basis of increased radiosensitivity in HPV-infected cells. Vincent Grégoire has directed or co-directed 15 PhD theses and has authored or co-authored 254 peer-reviewed publications and 16 book chapters. He has delivered close to 850 abstract presentations, lectures or teaching seminars worldwide, including award lectures such as the IFHNOS KK Ang lecture in 2014 and the Blair Hesketh BAHNO Memorial Lecture in 2015. He is a member of the editorial board of Radiotherapy & Oncology and is a member of numerous scientific societies, including ASTRO and ESTRO, on which he serves on various committees. He has been the President of ESTRO from 2007 to 2009. Vincent Grégoire is the past Vice-President of the board of EORTC, past-Chairman of the Radiation Oncology Group of the EORTC and of the Head and Neck group of the EORTC. He was Co-Chairman of the ICRU Report Committee that published Prescribing, Recording, and Reporting Photon-Beam Intensity-Modulated Radiation Therapy (IMRT) (ICRU Report 83, 2010). In 2008 he was awarded the Honorary Fellowship of the British Royal College of Radiology, and in 2016 Honorary Fellow of the Irish College of Radiology. In 2014 he received the Breur Award from ESTRO and in 2015 he was awarded Honorary ESTRO Physicist. He received the Jens Overgaard legacy award from ESTRO. Prof. Grégoire was elected to the Commission in 2012 and was elected Chairman in 2018.