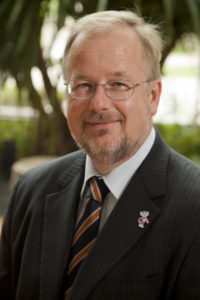 Thomas (Rock) Mackie is a medical physicist. He grew up in Saskatoon and received his undergraduate degree in Physics from the University of Saskatchewan in 1980. He went on to earn his doctorate in Physics at the University of Alberta in 1984. His expertise is in radiation therapy treatment planning, intensity modulated radiation therapy, medical devices including medical imaging systems and microscopy. He is a primary inventor and algorithm designer of the helical tomotherapy concept. Dr. Mackie is an emeritus professor in the departments of Medical Physics, Human Oncology, and Engineering Physics, and an affiliate of the Biomedical Engineering Department at the University of Wisconsin–Madison. He is the former Director of Medical Engineering at the Morgridge Institute for Research, a private not-for-profit medical research institute based in Madison. He has over 180 peer-reviewed publications, over 40 patents, and has been the supervisor for dozens of Ph.D. students. Dr. Mackie is a Fellow of the American Association of Physicists in Medicine and the AAPM William D. Coolidge Award recipient Dr. Mackie was a founder of Geometrics Corporation (now owned by Philips Medical Systems), which developed the Pinnacle treatment planning system and still operates its R&D facility near Madison. He was a founder and Chairman of the Board of TomoTherapy, Incorporated, a public company now owned by Accuray but still based out of Madison. He is a co-founder of Madison-based HealthMyne an integrated cancer information system for use in radiology and oncology. He is on the boards of Shine Medical Technologies, a medical isotope production company and BioIonix a company dedicated to water purification in food production and processing. In 2002, Mackie was one of six Wisconsin regional winners of the Ernst & Young Entrepreneur of the Year awards. Dr. Mackie has been a member of the board of the BioForward an organization supporting Wisconsin biomedical and medical device industries. He was a co-manager of Wisconsin Investment Partners, Wisconsin’s largest angel venture group. Mackie is the Chairman of the Board of the Center for the Assessment of Radiological Sciences, a not-for-profit promoting quality and safety in radiology and radiation oncology. He is the Vice-Chairman of WiSolve, not-for-profit organization promoting graduate student and post-doctoral entrepreneurship at the UW-Madison. Dr. Mackie was elected to the Commission in 2014 and elected as Vice-Chairman of the Commission in 2018.