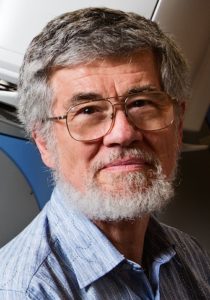 David Rogers received his BSc in Maths and Physics (1968) and MSc/PhD (1971) in nuclear physics from the University of Toronto after which he spent 18 months as a post-doc at the Oxford Nuclear Physics Lab. He joined the National Research Council Canada in 1973 and was group leader of the Ionizing Radiation Standards group from 1985 to 2003. He then took up a Canada Research Chair in Medical Physics at Carleton University in Ottawa where he was program director of the CAMPEP accredited graduate program in medical physics. While he formally retired at the end of 2014 he continues to teach a graduate course in radiotherapy physics and mentor graduate students and post-docs as part of the Carleton Laboratory for Radiotherapy Physics. His research interests include the development of the widely used EGS system of Monte Carlo codes for simulating radiation transport, the application of Monte Carlo techniques to radiation dosimetry problems in radiotherapy and the development of dosimetry protocols for reference dosimetry. David Rogers was the Deputy Editor of the journal Medical Physics from 2005 to 2013 and co-director of the AAPM’s 2009 Summer School on Clinical Dosimetry Measurements for Radiotherapy. He is a Fellow of the Royal Society of Canada and has been awarded the COMP Gold Medal as well as the AAPM’s Coolidge Gold Medal. He was elected to the ICRU in 2016.